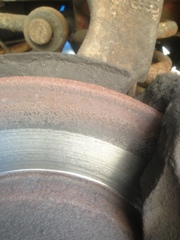 I'm afraid I don't speak any Croatian. There are however some words, phrases and sayings that take no translation though, such as the comment made by the Croatian mechanic in the garage we had pulled in to just south of Split. He had just removed the front wheel of Jezebel and was looking at the brake disc and pad. His comment, which I understood, was "AYE,AYE,AYE". Well, that'll be a new pair of brake pads then.
Now, the more tricky part. Croatia is just about to go in to shut down for a long weekend as they celebrate joining the EU. With Saturday lunchtime rapidly approaching, the manager of the garage was desperately phoning around to find spare parts for a 32 year old VW Camper van. He spoke very little English, so conversed with me in German. After I had told him to look out for wombats (it's the only German I know. That and apple juice, but I didn't think that was appropriate in the circumstances), he reverted to sign language. I gestured at my watch, he, rather worryingly, gestured at the calendar. July 2nd ? Oh hell.
Finally, he packed us off to a restaurant for an hour. As we returned, I was a little surprised to see Jezebel being driven down the road. I had mixed feelings about this. Good that she was now apparently fixed, bad that she was apparently being stolen. He brought her back 5 minutes later, so all was well in the world. 80 euros later and we were heading north once more to collect Evil Kev from Split airport. 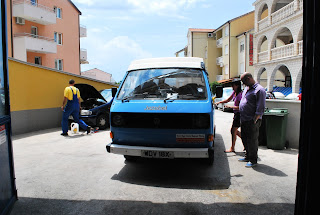 We had already traversed one country by breakfast time. If you travel up the main road from Dubrovnik, there is a 10km section of Bosnia, forming it's only piece of coastline. This was going to be one of our 23 countries, albeit a brief one. We got out of Croatia without any issues. The border guards didn't even want to see our passports. I then looked out for the entry barriers and checkpoint for Bosnia. Now, sometimes these can be within a few metres, sometimes a few miles of no man's land separate the two. This was obviously going to be a long no man's land. We skirted around the resort of Neum. I recognised it from photos when I had been researching the area. Still no entry checkpoint or insurance office. A few minutes later, we spotted a checkpoint. On arriving it was the exit checkpoint for Bosnia. We had crossed the country (well, the little corridor) without being able to buy any insurance.
A border guard who spoke very good English pulled us over. He asked to see the insurance document. He pointed out that we had no insurance for Bosnia. It seemed a bit pointless to buy it now that nothing untoward had happened. He let us off with a verbal spanking. Now, I would normally buy insurance where possible, even if it isn't going to be checked, however with insurance companies in England refusing to insure vehicles travelling to non EU countries and nowhere to be found to buy insurance in the country, we were a bit stuck. Add this to the fact that there was no indication to say that we had entered Bosnia until we were leaving Bosnia....
Anyway, we survived and continued up the stunning Croatian coastline. Whilst the main group were heading for Plitvice Lakes, about 2/3 of the way up the country, after collecting Kev and fixing brakes, I was concerned that we would be getting to the lakes a bit late. Coupled with the fact that Eileen had a date with Ryanair at lunchtime the following day, so an early start was required, I announced that we would be heading to a beach resort further up the country instead of the lakes. Others followed suit. 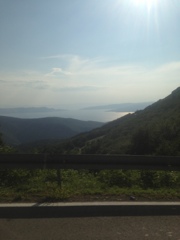 The Gentlemen of Trauma and Team Nightmare found Camp Ujca, close to Senj. A compact little camp site nestling in a rocky cove. No idea why but the water was Baltic.
Team Red 5 and Doris had also pushed on, past the turning to Senj and were looking for camp sites near Rijeka.
Team 41 reported in from a hotel at the northern tip, watching fireworks to celebrate the arrival of the vast EU subsidies heading Croatia's way.
Team 19, eager as always, got the e-mail for the following day and arrived at the destination a day early, to allow them to find a bar showing the British Grand Prix.
Team 48, The Wham Boys or Team Hire Car, desperate to throw off one of their titles, had pushed on towards Austria to trade in the hire car for the trusty(?) old Supra. They'll see us tomorrow. So, spread out over 3 countries and about 6 locations. That is the beauty of the event though. It doesn't really matter. Each team is independent but can link up with any one or more of the other teams. They can chose the recommended destination, or find something that suits them better.
That saying, I'm hoping we shall all meet up tomorrow in Postojna, Slovenia. It's a beautiful little country and Predjama Castle is a funky little castle sticking out of a cave. That's where I want to go. Sarah however has plans to visit Lipica. They have a large glue farm there, full of dancing ponies. Pure white Lipisana Horses are bred and trained here. Ghastly, horrible place that I was subjected to last time I came to Slovenia. Please, please, please, don't put me through that dancing pony show again.....